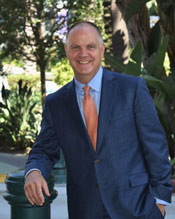 Chuck DeWeese was elected Chair of the Governors Highway Safety Association for the 2020-2021 term after serving as Vice Chair in 2019-2020. He also leads GHSA's Equity in Traffic Enforcement Workgroup and previously served as Chair of the Association's Federal Relations Committee and Annual Meeting Planning Committee.

DeWeese was appointed to the position of Assistant Commissioner for the Governor's Traffic Safety Committee in September 2007. Prior to his appointment, he spent 15 years working for the Federal Motor Carrier Safety Administration (FMCSA). His first seven years were spent as a Special Agent in charge of enforcing federal laws on truck and bus companies in upstate New York. Over the next eight years, Chuck served as the Field Office Supervisor for the FMCSA New York City Field office and spent one year in the role of acting Division Administrator.

As the Assistant Commissioner of the Governor’s Traffic Safety Committee for the last 13 years, Chuck has been the driving force behind the Committee’s most nationally recognized and effective traffic safety campaigns and programs, including the Distracted Driving Enforcement Project, the state’s Impaired Driving Advisory Council and the pedestrian safety education and enforcement plan.

In his tenure, traffic fatalities are down nearly 29%. He successfully re-energized the 12-agency statewide traffic safety committee, instituting transparency and demolishing silos, all while simultaneously awarding $32 million of federal funds annually to state, local and not-for-profit entities in New York state. He also led a conversion to a paperless electronic grants management system, allowing nearly 700 federally funded traffic safety grant requests to be processed in half the time as years past. Chuck was recognized with a Lifetime Achievement award in Traffic Safety by the American Association of Motor Vehicle Administrators (AAMVA) in 2019.