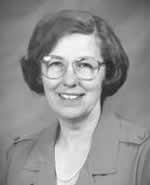 Dr. Marilyn Bull has fought for the most vulnerable occupants of our roadways—children with special needs. Without her unfailing dedication to a small and previously overlooked area of highway safety, it is unlikely that such improvements would have ever been made.

Dr. Bull first entered the field of highway safety as a director of a program to follow up on newborns after they left the hospital. In this position, she experienced the tragedies of having two children seriously injured and one die in car crashes. Motivated by her belief that these incidents were preventable, Dr. Bull lobbied agencies to fund a car seat program. Because of her efforts, the Automotive Safety Program (ASP) was established. Based at Riley Hospital for Children in Indianapolis, ASP provided needy patients with child restraints. Later realizing that special needs children could not use traditional car seats, Dr. Bull conducted research aimed at improving the safety of these children. As a consequence of her efforts, better designed car seats were constructed for children who were born prematurely, suffer from cerebral palsy, have hip casts or must lie down.

Dr. Bull remains committed to the area of highway safety in which she began her career. She has worked alongside a car seat maker to build customized seats for conjoined twins and an infant with only a partial sternum.

Dr. Bull has also worked to protect special needs children who are being transported in school buses and ambulances. When Navistar International Transportation Corporation and Thomas Built Buses, Inc. generously donated a school bus to the ASP, Dr. Bull used the gift to teach transportation professionals in Indiana about proper use of safety equipment on buses.

After a decade of persistent work with the University of Michigan Transportation Research Institute to develop a crashworthy ambulance cot and fastener system, Dr. Bull and the Institute released the first and only guidelines for securing child safety seats on ambulance cots. Dr. Bull is often called upon to provide presentations about these guidelines.

In addition, she has developed training tools in the form of videos, curriculum, brochures and peer reviewed articles. The tools provide instruction for transporting premature infants and children with orthopedic conditions. She has also written several American Academy of Pediatrics (AAP) brochures about these issues.

Another notable accomplishment of Dr. Bull is her development of a standardized training curriculum for transporting children with disabilities. The two-day training session provides certified child passenger safety technicians with additional knowledge to safety transport children with special needs.

Dr. Bull's commitment to highway safety is laudable and quite deserving of GHSA's highest honor.