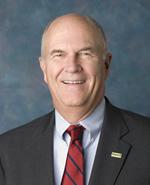 Charles "Chuck" Hurley is the recipient of the 2010 James J. Howard Highway Safety Trailblazer Award. During his more than 30-year career, he has become one of the most recognized highway safety advocates in the country, pushing for comprehensive safety legislation on various highway safety issues such as: improved driving laws; the installation of air bags in automobiles; strong seat belt and speeding laws; safer automobile designs; and child passenger safety at both the state and national levels.

Chuck Hurley's safety advocacy began in 1977 when he joined the National Safety Council. For the next 30-plus years he would be one of the most tireless and influential members of the highway safety community through positions at the Council, the Insurance Institute for Highway Safety and the Air Bag and Seat Belt Safety Campaign, on the MADD National Board and as Chief Executive Office of MADD. Since the late 70's, he has worked with every Secretary of Transportation, NHTSA Administrator and countless members of Congress to improve the nation's record on highway safety.

Perhaps more than anything, Hurley is identified with the development and implementation of the Click It or Ticket campaign. At his urging, the Click It or Ticket campaign was piloted in North Carolina and then implemented at the national level. The slogan and enforcement message quickly became part of the public lexicon, and Chuck's mantra became "enforcement, enforcement, enforcement..." In large part due to Click It or Ticket, the national seat belt use rate has gone from the high 60's and low 70's to a record high of 84 percent. In many states, it is well above 90 percent, translating into countless lives saved.

On the difficult issue of drinking and driving, Hurley was a leader in the effort to increase the drinking age to 21, working closely with MADD's Candy Lightner, Chairman James J. Howard and Congressman Mike Barnes. Additionally, his work and collaborations helped reduce the legal definition of drunk driving to 0.08 BAC. Both landmark laws have resulted in the removal of many more drunk drivers off the road and the decline in drunk driving fatalities by one-third since 1982.

Not willing to rest on his accomplishments and coast toward retirement, Hurley became CEO of MADD in 2005. Realizing that progress in reducing drunk driving had become stalled, he created the Campaign to Eliminate Drunk Driving, which kicked off in November 2006. The Campaign's goal to eliminate drunk driving is a simple statement, but a complex undertaking. Hurley recognized this when creating the four essential elements: mandatory ignition interlocks; increased law enforcement efforts; advanced vehicle technology; and public support. This four-point plan has raised the bar in the states, from a goal of lowering drunken driving fatalities to that of eliminating them. Chuck testified before countless state legislatures on ignition interlock bills for first time offenders, and he has changed the dialogue in Congress on this issue.

He also advocated for advanced technology to detect impairment -- an effort that is becoming a reality with the support of the federal government and automotive industry. As MADD CEO, he also formed an effective coalition to defend the 21 drinking age and beat back efforts to repeal that national law.

As a highway safety pioneer, Hurley has pushed boundaries and fought the status quo. As with any pioneer, over the years has been at odds at times with others in the highway safety community. What has set him apart has been his willingness to work with all partners who are interested in achieving the same goal, even if the methods are different. Through it all, Chuck remained an inveterate storyteller with a great sense of humor.

Chuck Hurley has saved an innumerable number of lives through his dedication to highway safety. His work has reverberated across all facets of highway safety and caused a change in action and mindset. Although this year marks his retirement, his vision has been instilled in highway safety officials across the nation who will continue what he has started.