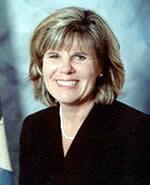 The 2010 Kathryn J.R. Swanson Public Service Award is presented to Tricia "Trish" Roberts. A longtime employee at the Delaware Office of Highway Safety, Roberts repeatedly proved herself a valuable member of the team. Her creative ways to reach the public paired with her determination to see effective legislation enacted and her dedication to connecting with other highway safety organizations are just a few of the reasons Roberts deserves this recognition. A tireless advocate, Roberts embodies the same spirit of commitment to highway safety as exemplified by Kathy Swanson.

Trish Roberts dedicated her time and energy toward highway safety for more than twenty years with the Delaware Office of Highway Safety (OHS). In 1989, she jointed the Delaware OHS serving as Community Relations Officer. Her efforts focused on increasing seat belt usage and educating the public about the risks of impaired driving, and she participated in countless public awareness campaigns to educate the public about such issues.

Trish served as Acting Director before becoming Director in 1994. From then until her retirement in July of 2010, she led the Delaware OHS and the state to its highest level of highway safety success. For many years, she served as the legislative liaison between OHS and Delaware's General Assembly, providing valuable information and testimony on highway safety issues to lawmakers. Under her leadership, Delaware saw the passage of a primary seat belt law, .08 BAC legislation, repeat DUI offender legislation, a bicycle helmet law covering those under 18, several upgrades to the child restraint law, and one of the strongest graduated licensing laws in the nation. During her tenure in 2002, the OHS launched its first Click It or Ticket campaign; eight years and a lot of hard work later, Delaware boasted a 91% seat belt use rate, one of the best in country.

Impaired driving has been one of Roberts' primary focuses throughout her OHS career. She actively participated in the Region's Checkpoint Strikeforce DUI prevention program and became one of the program's most vocal proponents. This initiative helped foster a better relationship with the Attorney General's office and led to Delaware gaining their first Traffic Safety Resource Prosecutor in 2006. Roberts also initiated several innovative features to enhance Delaware's impaired driving enforcement activities. She worked with the Attorney General to authorize cross-jurisdictional law enforcement teams to conduct checkpoints throughout the state, including happy hour and Monday night football checkpoints. This led Delaware to have more checkpoints than states twice its size. Additionally, under her leadership, a repeat offender tracking system was instituted.

Roberts has also helped made office data more standardized and efficient, leading to further safety progress. She helped spearhead the effort to transform Delaware's paper crash and citation system into more effective electronic systems. The ease of collecting information in the E-ticket and E-Crash databases helped convince Delaware law enforcement to participate in enforcement actions. Roberts used this improved data to recruit the law enforcement agencies in the most problematic jurisdictions. The E-ticket and E-crash systems resulted in an OHS and Delaware State Police partnership that resulted in CHAMPS, a GIS based mapping system using the information from the data systems to map the locations of motor vehicle crashes.

Roberts also served the highway safety community nationally and was elected numerous times to sit on GHSA's Executive Board. Roberts led a task force of highway safety office and NHTSA staff to promote better relations and communication between GSHA and NHTSA at a time when the state/federal partnership was not as strong. Roberts' leadership and commitment laid the groundwork for the strong NHTSA/GHSA relationship that exists today. In addition to GHSA, Roberts was an active participant with NHTSA's Region III office and their initiatives, and she provided training to others in the field.

Trish Roberts—like her good friend Kathy Swanson—is one of those rare individuals who do not seek the limelight but remain focused on the goal of saving lives by working behind the scenes. Our roads are safer because of her commitment.