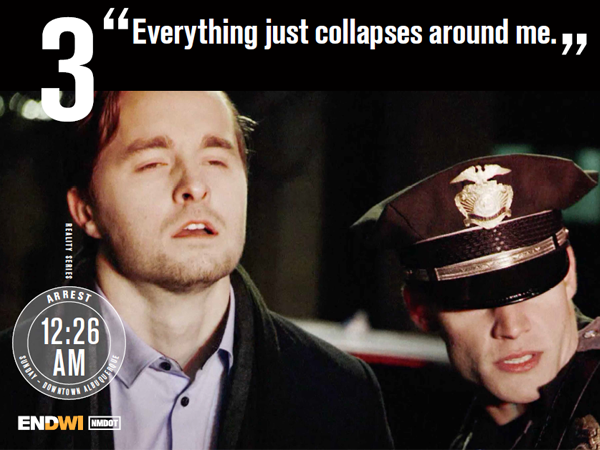 Under the direction of New Mexico Governor Susana Martinez, the New Mexico Traffic Safety Bureau has taken an innovative approach to alcohol-impaired driving prevention through their recent “Reality Series – Over the Limit” campaign. The campaign, styled as a docudrama split into 30- and 60-second PSAs, reveals the realities of what happens to an individual who is arrested for a DWI. 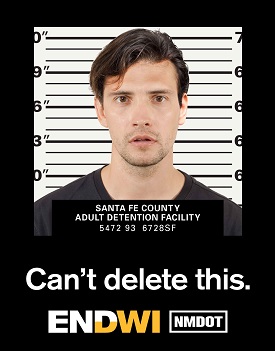 Knowing that few members of the public truly understand what happens during a DWI arrest, each of the nine spots focuses on a step of the process, following one man from arrest to incarceration to eventual release. The long campaign format allowed for the Traffic Safety Bureau to show the harsh realities of arrest, including steps like being finger-printed and strip-searched. These PSAs were played during high visibility enforcement periods including the holiday season, St. Patrick’s Day and Cinco de Mayo. The thirty-second spots appeared sequentially in groups of three on television, including during the 2017 Super Bowl.

In addition to airing the PSAs on TV, the sixty-second spots were posted online at NMDOT’s ENDWI.com. Digital ads were also placed highlighting the consequences of an impaired driving arrest, along with radio ads and highway billboards carrying the campaign message. Finally, during the Cinco de Mayo enforcement period, a 12-minute compilation of the ads was released, pulling together the story to show the full DWI arrest process. This long form video will be distributed to Drivers’ Education schools to inform and warn novice drivers of the risks of driving under the influence.

The first spot in the series can be viewed below, and the subsequent PSAs and long form video can be accessed on ENDWI New Mexico’s YouTube page. To learn more about the campaign and New Mexico’s impaired driving efforts, visit ENDWI.com.

Governor Martinez has made fighting DWI in her administration a priority. Last year, the Governor enacted legislation that increased penalties against drunk drivers to some of the toughest in the region. The administration also launched a campaign aimed to stop servers and establishments from over-serving alcohol. In addition to the crackdown on DWI offender absconders and DWI bench warrant roundups, Governor Martinez also announced a court monitoring program that placed citizens inside courtrooms in six counties to shed light on how DWI cases are handled.