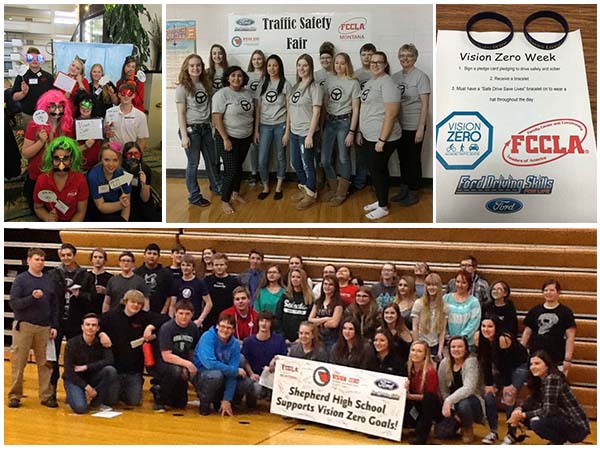 In 2017, the Montana DOT State Highway Traffic Safety Office (MDT) received a grant from GHSA and Ford Driving Skills for Life to advance its teen traffic safety efforts through a partnership with the Montana Family, Career, and Community Leaders of America (FCCLA).

Focusing on peer-to-peer education, MDT launched a grant program for the state's FCCLA chapters to design and implement traffic safety projects in their own communities. The program was launched at Montana FCCLA's 2017 Leadership Rally, which featured a Resource Fair for students to see and experience examples of tools they could use within their own projects. Booths included resources and safety demonstrations regarding impaired driving, seat belt use, child passenger safety and distracted driving.

Chapters were then tasked with creating their own projects and submitting a grant application for MDT's review. Twenty chapters applied, 11 of which were selected to receive grants of up to $750 from this funding. An additional five FCCLA chapters received NHTSA funding to carry out their projects. Among the funded projects were efforts to partner with local organizations and law enforcement to encourage seat belt use, organizing a community-wide traffic safety month focusing on different issue areas each week, and creating mock crash scenes to show students the impact of dangerous driving behaviors. Upon completion of the projects, three chapters were awarded grand prizes from MDT to further support their efforts. Finally, chapters were encouraged to submit their projects to be considered for FCCLA's National Program awards, elevating awareness of the program to the national level.