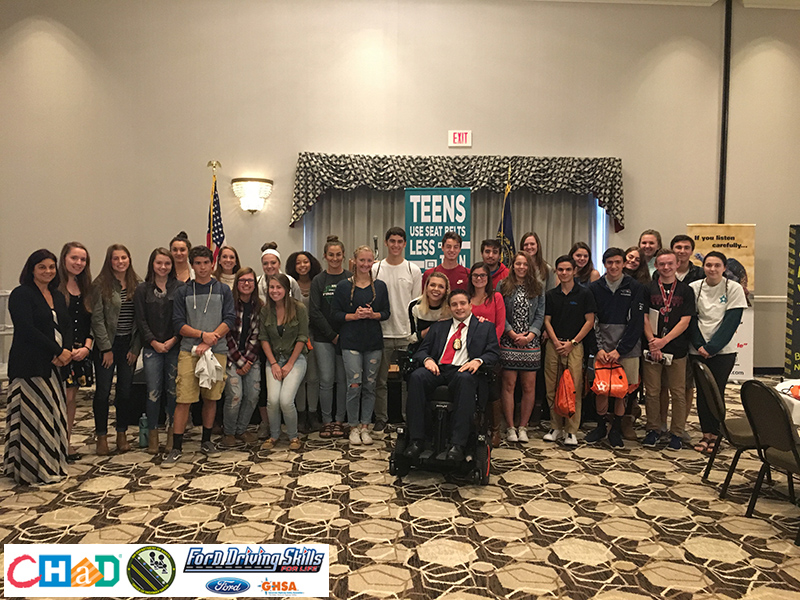 Through a grant from GHSA and Ford Driving Skills for Life, the New Hampshire Office of Highway Safety worked with the Children's Hospital at Dartmouth Hitchcock's Injury Prevention Center to host a teen driver safety conference in October 2017.

While safe driving behavior is often addressed around prom-time in New Hampshire, this conference, themed "Be The Change," brought up the topic during the fall and keep teens thinking about safety throughout the year. The event also addressed the opioid epidemic, emphasizing the dangers of drug-impaired driving.

More than 100 teens from New Hampshire schools attended the half-day conference, which began with a short survey assessing the students' attitudes toward dangerous driving behaviors and their knowledge of safe practices. Students then heard from Garrett Fitzgerald, who was paralyzed in a crash involving a heroin-impaired driver, as well as his wife Joan, about the crash's impact on their lives. Following the Fitzgeralds was the Wakefield police chief, who spoke about the difficult responsibilities first responders have being at the scene of a crash and delivering painful news to families. Finally, NASCAR driver Melissa Fifield emphasized to the students that making good choices influences teens' ability to achieve their goals later on in life. To keep safety in the students' minds even after the event, attendees received materials promoting the Teen Driver program and the motto of Making Good Choices as they left the conference.

The event was very successful, with teens providing overwhelmingly positive feedback. Reaffirming the event's impact, the Injury Prevention Center has received several inquiries from teachers and administrators asking for similar events to be brought to their schools, and it plans to use this event as the basis for future programming.