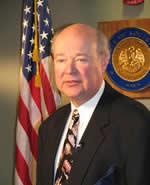 In his more than 40-year career, Jim Champagne has brought unmatched commitment, passion and zeal to highway safety.

As a state trooper, in various positions in the Louisiana State Police leadership, as the state's Governor's Highway Safety Representative (GR) and as chairman of GHSA, Champagne's dedication and perseverance have resulted in countless lives being saved.

Champagne spent more than 20 years as a state trooper in the Louisiana State Police, culminating with his promotion to Lieutenant Colonel, Chief of Staff. During his work as a state trooper, Champagne delivered more than 50 death messages to parents letting them know their son or daughter would not be coming home.

Champagne was appointed Louisiana's GR in 1996 and continued in that role until March of 2008. During his tenure, Champagne passionately advocated for highway safety changes in Louisiana, despite a socio-economic culture that is challenging to highway safety and a pervasive attitude of permissiveness toward drinking and driving. In the face of these obstacles, Champagne was still able to bring together a variety of state agencies, safety groups and even the alcohol industry to affect positive change. During his 12-year tenure as GR, Champagne was the driving force behind the passage of key laws, including: .08 BAC, youth zero tolerance, keg registration and the primary seat belt law. He also worked tirelessly to obtain the unanimous Louisiana Supreme Court ruling that sobriety and seatbelt checkpoints are legal in the state and to retain the state's motorcycle helmet law.

One of the bigger disappointments of Champagne's career was Louisiana's repeal of its all-rider motorcycle helmet law in 1999. Not surprisingly, almost immediately after the repeal, Louisiana saw a surge in motorcycle rider deaths. Champagne knew what needed to be done, and he was able to convince a new governor to support reinstatement of the law. Despite opposition, an all-rider helmet law requirement once again became law in 2004. Louisiana, with Champagne's leadership, is the only state in more than a decade to successfully re-enact an all-rider helmet law.

Champagne led the effort to transform Louisiana's paper crash reporting system into a much more effective electronic system. He also urged other states to upgrade their systems and has been a proponent of more accurate and timely crash data. While not a glamorous issue, Champagne recognized that data was a key need for highway safety, and he brought about positive improvements in Louisiana and encouraged them in other states.

Given Champagne's successes in Louisiana, it is not surprising that his expertise was admired and sought at the national level. From 2002-2006, he served as Vice Chairman and then Chairman of GHSA. During this period, he brought the Association and highway safety to a new level of public awareness and impact.

Champagne has had tremendous impact across the country. During his chairmanship of GHSA, he championed difficult highway safety issues, including speeding and motorcycle safety. On the issue of speeding, he spearheaded a GHSA report on the state of speeding and speeding programs throughout the country. This report generated national media attention and helped begin a dialogue on this difficult topic.

Champagne continued to push the issue and convinced NHTSA to jointly sponsor the National Forum on Speeding with GHSA. This Forum brought together all the key players on the issue and resulted in a road-map for dealing with speeding. Champagne was also successful in encouraging NHTSA to develop communications materials for communities faced with speeding problems.

Champagne used his state's own experiences with repealing a motorcycle helmet law and the subsequent rise in fatalities to urge other states to retain their laws. In spite of pressures from helmet law repeal groups, he spoke up and urged legislators in Michigan, Virginia and West Virginia to retain their laws. These life-saving laws remain on the books today in those states.

As an active member of GHSA throughout his tenure as GR, Champagne has served as a mentor and colleague to countless GRs across the county. When new GRs came into the organization, they quickly learned that Champagne was someone whose experience and counsel was extremely helpful. Champagne's understanding of highway safety has helped numerous other GRs do their job better.

Champagne's commitment and service went well beyond GHSA. His service also included stints on the national boards of Operation Lifesaver and Students Against Destructive Decisions (SADD). His leadership and success have resulted in numerous awards and recognition. These include the J. Stannard Baker Award from the International Association of Chiefs of Police, the Highway Safety Partner Award from MADD, as well as awards from the National Commission Against Drunk Driving and SADD.

Since becoming a private citizen in March of 2008, Champagne has spoken out against efforts in his state to once again repeal the motorcycle helmet law. He gave passionate testimony urging legislators to keep the current mandatory helmet law intact. His positive interaction with the statewide media and medical communities convinced the majority of legislators to keep traffic safety a legislative priority. Champagne won the day, and despite strong political pressure, Louisiana's helmet law remains secure.

Many people, particularly in the southern U.S., are alive today because Jim Champagne cared enough to go the extra distance to bring about change.