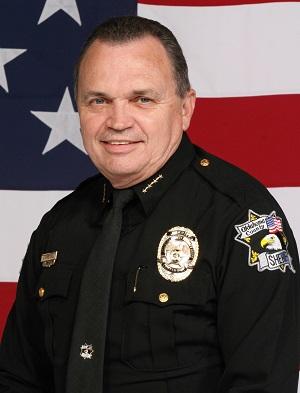 Sheriff John Whetsel is a passionate national advocate for traffic safety. His passion was ignited by a personal tragedy – the death of his first wife and 2-year-old daughter in a car crash that occurred when a law enforcement officer ran a stop sign during a police pursuit. This inspired him to work to change the way that officers conduct pursuits and enhance their training and to do everything he could to make our roadways safer.

Sheriff Whetsel began his nearly 50-year career in law enforcement the week after he graduated from high school. During his career, he served as Chief of Police for the town of Jones and the City of Choctaw, both in the Oklahoma City metropolitan area, and was elected Sheriff of Oklahoma County in 1997. He held that position for 21 years and six terms, retiring in March 2017.

He made traffic enforcement a priority in his office as well as officer safety, requiring his deputies to buckle up when behind the wheel. As sheriff, he implemented sobriety checkpoints, conducted driver safety programs, and created a traffic safety unit. Since 1992, officers in Oklahoma have been required to undergo specialized drivers’ training. In addition, deputies in his sheriff’s office have been required to obtain annual driver recertification. These efforts helped contribute to a 90 percent reduction in traffic crashes in the fast-growing rural areas of Oklahoma County during his tenure.

Sheriff Whetsel is a national leader, serving as the current chair of the National Sheriffs’ Association Traffic Safety Committee and as past president of the International Association of Chiefs of Police, Oklahoma Association of Chiefs of Police, Oklahoma Sheriffs’ Association, and the Oklahoma Sheriff and Peace Officers Association. In addition, he has served on working groups for the Governors Highway Safety Association (GHSA), the National Highway Traffic Safety Administration (NHTSA), Mothers Against Drunk Driving (MADD) and works with the Below 100 program and the Road to Zero initiative. He has traveled the country to make presentations on traffic safety and officer safety.

During his career, he has been recognized with numerous awards and honors, including the J. Stannard Baker Award for Highway Safety, and was inducted into the Oklahoma Sheriffs’ Hall of Fame and the Oklahoma Law Enforcement Hall of Fame in 2011. His many accomplishments, commitment to the mission of saving lives, and continued contributions to and impact on traffic safety efforts make Sheriff Whetsel an outstanding choice GHSA's highest honor.