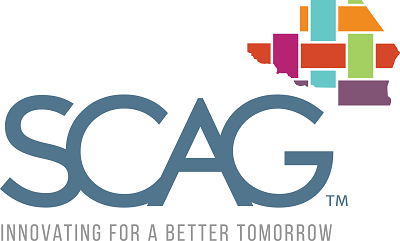 The Southern California Association of Governments, or SCAG, and their “Go Human” bicycle and pedestrian safety program first brought together partners across Southern California in 2019 to reduce collisions involving people who walk and bike through a traffic safety advertising campaign. With the support of the California Office of Traffic Safety, SCAG engaged 50 new partners, printed and distributed more than 16,000 materials and implemented a co-branded campaign that generated approximately one million impressions, adding to the nearly one billion impressions already generated throughout the SCAG region. Two years later, these partners to continue to promote the Go Human program in 191 cities in six counties.

The program has many components, including a safety materials lending library called Kit of Parts, that enables jurisdictions to test temporary safety demonstration projects with the public and generate critical support for permanent infrastructure improvements. These modular pop-up pieces – similar to oversized Legos – include parklets, creative crosswalks, separated bike lanes, median refuge islands and curb extensions. When showcased together, the Kit of Parts create a Complete Street that enables community members to test out safety improvements in live traffic settings and provide feedback. The Kit has been deployed more than 20 times at a variety of events reaching residents who are unlikely to attend a community or city meeting on transportation issues. In addition, more than one third of the safety demonstration projects have been funded or permanently installed.

Wanting to build greater awareness and leadership for traffic safety improvements, SCAG organized a regional safety symposium attended by more than 140 elected officials and transportation leaders. As a result, 22 local agencies signed a pledge committing to improve safety in their jurisdictions through a variety of strategies.