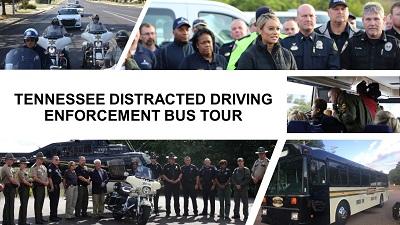 In 2017, Arriale Tabson, the Tennessee Highway Safety Office’s Public Information Officer, proposed the idea of using a bus to enforce Tennessee’s distracted driving law and call attention to this risky behavior. The idea came to fruition thanks to a partnership between her office, the state’s Law Enforcement Liaisons and the Tennessee Highway Patrol (THP). Together, they identified the resources and staffing needed to implement the tour, developed logistics and publicity plans and set to work bringing the idea to life.

The tour launched in April 2017. It featured a large black and tan bus marked with the THP logo that transported law enforcement officials tasked with observing motorists engaged in distracted driving and other unsafe behaviors. The bus crossed the state for four days and during that time officers on the bus used their high vantage point to communicate with local law enforcement officials in patrol vehicles along the route to engage with drivers spotted texting. Each participating agency conducted one to two hours of enforcement. Local media were invited to press briefings conducted during the tour and to ride along and cover the initiative. During the inaugural tour, 224 traffic citations were issued statewide.

Since then, there have been six statewide distracted driving enforcement bus tours. In the second year, the Highway Patrol provided two buses. Each year since then, other law enforcement agencies in counties outside the major cities have implemented their own bus tours without Highway Safety Office assistance. In 2018, the tour was dubbed “Operation Incognito” and coincided with National Traffic Incident Week and, in April 2020, it was branded “Operation Hands Free” to promote Tennessee’s hands-free law that took effect the previous July. The Highway Safety Office plans to conduct the campaign annually, particularly in the current COVID-19 environment. And the effort is paying off as the number of motorists engaged by law enforcement officials has nearly doubled every year since the program’s inception.

The bus tour strategy has proven to be an innovative enforcement and public outreach tactic that sends a clear message to motorists that driving distracted is unsafe and against the law.