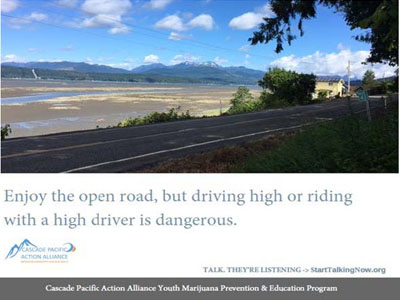 Through a grant from Ford Driving Skills for Life and GHSA, the Washington Traffic Safety Commission partnered with the Cascade Pacific Action Alliance's (CPAA's) Youth Marijuana Prevention and Education Program (YMPEP) for a campaign warning teens about the dangers of marijuana-impaired driving.

YMPEP, which works with communities throughout the Washington State counties of Cowlitz, Grays Harbor, Lewis, Mason, Pacific, Thurston and Wahkiakum, aims to increase youth perception of harm by addressing community norms and increasing family support. After a survey found that 25% of 10th graders in the area reported having ridden with a driver high on marijuana, YMPEP's Workgroup decided to use the funding to focus on changing teens' attitudes toward riding in cars with high drivers.

To accomplish this, YMPEP created two sets of advertisements – one addressing teens and one addressing parents – drawing attention to this issue. Teen driving ads revolved around the messages "Drivers who use marijuana are impaired" and "Make the best decision for you. Call someone else for a ride." Advertisements geared toward adults used the tagline "They're Listening," reminding parents to talk their teens about marijuana and why riding with a driver under the influence of marijuana is unsafe. YMPEP community partners then disseminated through social media, movie theaters and printed posters. Social media messaging reached nearly 30,000 people across Facebook, Twitter and Instagram, while digital movie theater advertisements received more than 1.4 million impressions and drove 1,500 people to click through for more information. Printed posters were placed in pediatrician offices, sheriff offices, police departments, schools and other prominent public locations.

The campaign's visibility generated significant conversation in the communities in which ads were placed, opening up opportunities for further discussion with teens and their parents about the dangers of riding with a marijuana-impaired driver.