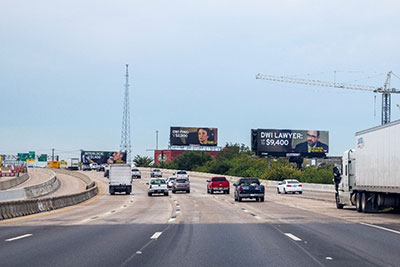 Through a grant from Responsibility.org and GHSA, the Texas Department of Transportation (TxDOT) created a college football campaign for the 2021 season to promote the use of Lyft ride-hailing services.

TxDOT leveraged assets created for its statewide “Drive Sober. No Regrets.” campaign, which shares personal accounts from real offenders and survivor advocates that address the consequences of driving drunk. It also reinforces the importance of having a sober ride and using alternative transportation such as ride-hailing. To encourage fans to do this after games, TxDOT offered $15 off a Lyft ride with a focus on 18–24-year-old men, who are the most likely to drink and drive and frequently attend or watch college football games.

To promote the campaign, TxDOT created an interactive online tool on its Sober Rides website, the “Consequence Spinner,” which gave people the opportunity to earn a free digital Lyft voucher. As part of the game, individuals watched videos of real people affected by impaired driving and learned about alternatives to driving while impaired. English and Spanish digital ads promoting the campaign ran throughout the 2021 college football season and were geofenced in entertainment districts close to colleges in the 10 Texas markets with the greatest number of impaired driving crashes and fatalities.

TxDOT launched their campaign by placing three billboards on major roadways adjacent to the entrance to the annual Texas State Fair. They also held six outreach events at college campuses and tailgate parties. During each event, participants were given the opportunity to receive a card with a Lyft ride credit if they watched a testimonial video or tried their hand at TxDOT’s drunk driving simulator.

Additionally, TxDOT held an outreach event at a popular Dallas sports bar, The Nodding Donkey, in conjunction with the Texas/Oklahoma rivalry football game. Table decals, coasters, posters and mirror clings were placed throughout the bar containing campaign messaging and a QR code inviting patrons to play the “Consequences Spinner” for a chance to earn a $15 Lyft ride credit.

The campaign proved to be incredibly successful. Over the course of TxDOT’s outreach effort, a total of 2,385 Lyft ride credits were redeemed, meaning 2,385 potential impaired drivers were removed from the road and given a safe way home after drinking.