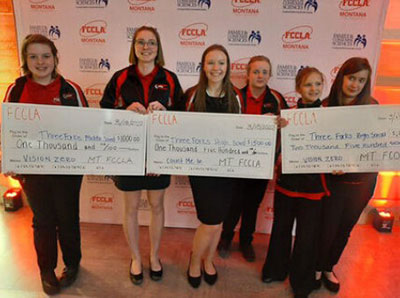 During the 2021-2022 school year, through a grant from Ford Driving Skills for Life (Ford DSFL) and GHSA, the Montana Department of Transportation (MDT) partnered with six local Family, Career and Community Leaders of America (FCCLA) chapters to create, implement and distribute teen traffic safety messaging in their communities with a focus on speeding.

Beaverhead FCCLA created the “A Fast Drive Could Be Your Last Drive” campaign to get students to slow down behind the wheel. Chapter members offered wrist bands to students who pledged to drive slow every time they got into a vehicle. Students and staff signed a poster pledging to slow down as well. Students and staff also learned about the dangers of teen drivers speeding throughout the day. 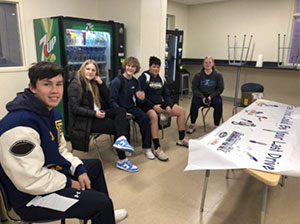 The Beaverhead FCCLA chapter estimates they reached 500 people through this grant opportunity.

Jefferson County High School FCCLA conducted a traffic safety day at their school. The day focused on the rising number of traffic crashes due to speeding and distracted driving happening in the community, as well as increased seat belt usage. 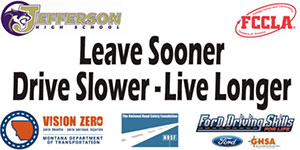 Through this grant opportunity, Jefferson County High School FCCLA reached approximately 600 students and community members with messages about the dangers of speeding, distracted driving and not buckling up.

Medicine Lake FCCLA collaborated with a local photographer and billboard company to create a campaign highlighting the importance of slowing down to protect pedestrians within their community. 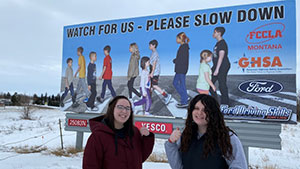 Chapter members also conducted real-time observations of speeders with students. Students counted the cars they felt were speeding, who made eye contact or noticed the students, who was on the phone and who waved.

In addition, chapter members collaborated with the school’s elementary teachers to talk with young students about pedestrian safety. Students also engaged law enforcement by sending a letter urging the local sheriff’s department to pick up more regular shifts for speed monitoring and created an Instagram account to promote their campaign materials.

The Medicine Lake FCCLA chapter estimated that they reached approximately 2,000 drivers through this grant opportunity. That is an outstanding number considering the population is just 244.

Power FCCLA invited their local sheriff to speak with students about safe driving, speeding and the dangers associated with distracted driving. In addition, they purchased four bright orange “Slow Down Men” that line the street in front of the school to remind drivers to obey the 15 mph speed limit. 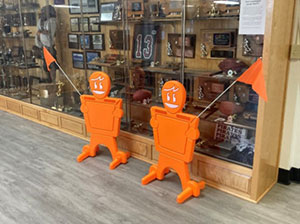 Three Forks High School FCCLA created the “Slow Your Roll…Keep Control” campaign. They started by conducting three speed checks at the beginning of the campaign both before and after school. From the checks, they discovered that one out of four vehicles didn’t stop for stop signs or were exceeding 15 mph. They also created “Slow Your Roll” signs that were placed around school grounds. 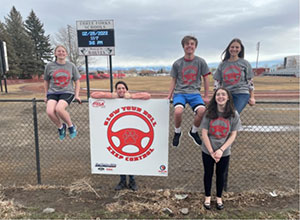 At the end of their campaign, another speed check was conducted that showed slower speeds compared to the first check. They also created two YouTube videos to support the campaign that can be viewed here and here.

Three Forks Middle School FCCLA incorporated their school mascot to create the “Walk Like a Wolf” campaign. The campaign focused on speeding in school crosswalks, specifically bringing awareness to elementary school aged children about the dangers of crosswalks and drivers who exceed the 15 mph zone.

Prior to kicking off the campaign, chapter members conducted a study that found one out of every four cars driving in front of the school either exceeded the 15 mph zone, failed to stop at the stop sign or both. Once the campaign began, the chapter contacted the Mayor and City Council to get permission to paint paw prints in the crosswalks around the school to draw driver attention to these areas. Chapter members also created a puppet show on crosswalk safety to educate elementary-aged students to watch for cars that don’t slow down in these areas. 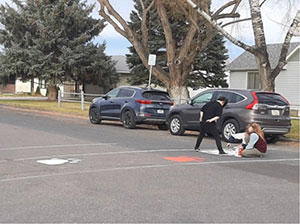 The Three Forks Middle School FCCLA chapter estimated that they reached 4,660 drivers through this grant opportunity.

MDT believes all participating FCCLA chapters did an outstanding job with their campaigns. This grant opportunity allowed for broader participation from teens statewide in their peer-to-peer traffic safety program. Some of the materials created will be used by MDT throughout the year. FCCLA’s many rural area districts proved to be a great venue for providing information to students in hard-to-reach areas.