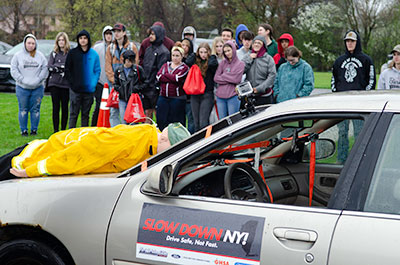 Through a grant from Ford Driving Skills for Life (Ford DSFL) and GHSA, the New York State Governor’s Traffic Safety Committee (GTSC), in conjunction with the Niagara County Sheriff’s Office, New York State Police and the New York State Department of Transportation, held a speed-focused traffic safety fair to show high school students – many of whom are driving or will soon be – how speeding can put themselves, their passengers and everyone on the road in danger.

The fair was held on two different days, with identical events held on May 3 and 4 at the Kenan Center in Lockport, NY. Students from high schools across Niagara County attended the events and took part in the following demonstrations:

GTSC’s biggest success with this program was pulling off two large-scale events attended by a total of 565 students, with most being high school seniors just beginning to drive. The faces of the students told the story – they were impacted by what they saw and heard. GTSC hopes their biggest take-away was that speeding is not a frivolous traffic infraction, but a serious one that could cost someone their life. GTSC believes that message was delivered loud and clear.