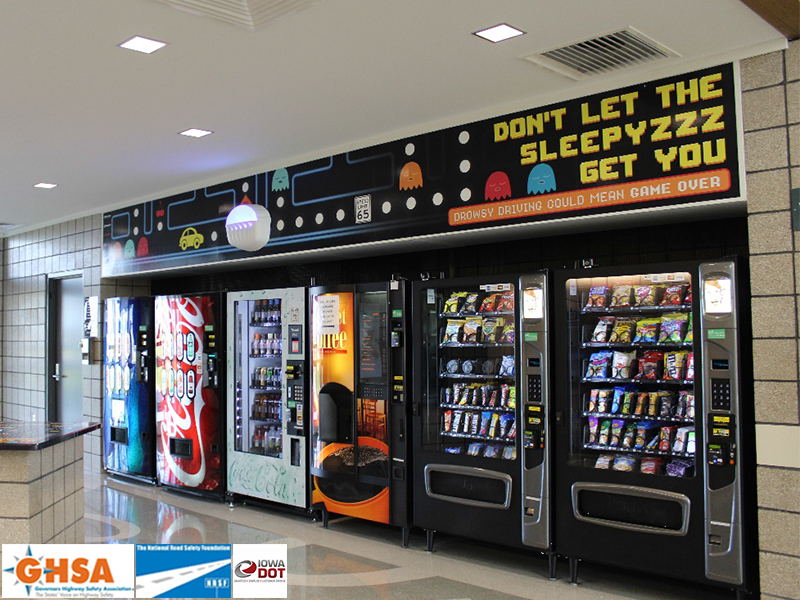 Iowa has been a forerunner in combating drowsy driving for years. In 2017, a grant from GHSA and the National Road Safety Foundation helped the state's Zero Fatalities program expand its efforts and amplify the anti-drowsy driving message.

Iowa Zero Fatalities, a multi-disciplinary group including the Iowa Departments of Transportation, Public Safety and Health, used the funding to launch "Don’t Let the Sleepyzzzz Get You," a campaign targeting travelers at rest areas across the state. Campaign graphics, which depict "Sleepyzzzz" chasing potentially drowsy drivers, were installed at 38 Iowa rest areas, featured on rest area bulkheads, counters around trash receptacles, and in poster displays. To supplement these graphics, Iowa DOT also created campaign rack cards including information on the warning signs and dangers of drowsy driving, 5,000 of which have been distributed at the rest areas. Additionally, DOT used its social media channels to further spread the campaign message to its thousands of followers across the state.

The "Don't Let the Sleepyzzzz Get You" campaign re-frames drowsy driving as a behavior as dangerous as drunk, drugged, or distracted driving, a message that is especially crucial to convey to the road trippers, long-haul truckers, and others likely to use rest areas. Iowa DOT estimates that 16 million travelers will use the rest stops in the next year, providing millions of opportunities for the campaign's messages to be seen and help save lives.