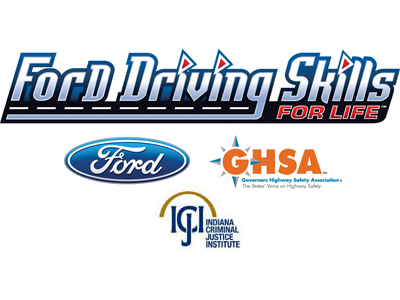 Having received a teen safe driving grant from Ford Driving Skills for Life and GHSA in 2016, the Indiana Criminal Justice Institute (ICJI) was able to teach teens the importance of seat belt use through a state-wide contest.

ICJI partnered with the Indiana Department of Education and SADD to send initial implementation guides to schools and invite them to participate in the events. Within just a few days of the announcement, the 50 open school participant slots had already been filled. Each school then held a Quick Click Contest among students, in which teams of four raced to get buckled up as quickly as possible. The teams that got all of their belts on in the least amount of time were awarded prizes including T-shirts and gas cards.

Participating schools were also asked to produce a PSA addressing a traffic safety issue to be shared on social media. A panel of judges from ICJI and SADD scored the videos based on their originality, message, educational, level of entertainment and impact. The winner was Tell City High School, whose moving tribute to a student who had been killed in a crash encouraged teens to use their seat belts. ICJI presented the school with a $5,000 prize at an all-student assembly.