Kentucky "Buckle Up in Your Truck 225" Race & Campaign 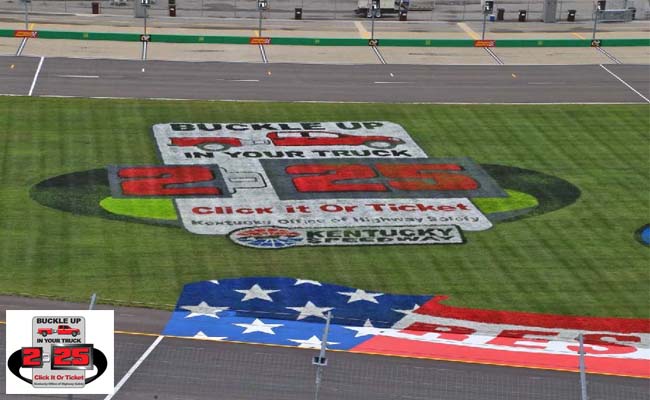 NASCAR’s fan base largely overlaps with those drivers most likely to undertake risky behaviors behind the wheel, and several State Highway Safety Offices have collaborated with drivers and tracks to deliver the safe driving message. The Kentucky Office of Highway Safety (KOHS) is one such state, partnering with the Kentucky Speedway for “Buckle Up in Your Truck 225.”

The “Buckle Up in Your Truck 225” educational campaign sponsored the 2017 NASCAR Camping World Truck Series Event, showing truck drivers the importance of wearing their seat belts. In advance of the event, the Kentucky Speedway included the “Buckle Up in Your Truck 225” logo and messaging in promotional press conferences and television, radio, social media, and newspaper advertisements, generating widespread media and public attention to the campaign. The campaign had a prominent presence at the event as well, with messages included in and on event tickets, stages, programs, all race vehicles, and even the grass.

The Camping World Truck Series Event received an average of 439,000 viewers per minute, resulting in an estimated 14 million TV impressions for the campaign between advance media and race day viewership. “Buckle Up in Your Truck 225” messaging received an additional 375 million impressions from online news and social media.

KOHS also partnered with law enforcement on the campaign. In the weeks leading up to the event, officers distributed 1,500 event ticket vouchers as rewards to motorists wearing their seat belts. Agencies that demonstrated exemplary efforts were eligible to win autographed racing seat belts from drivers competing at the event.