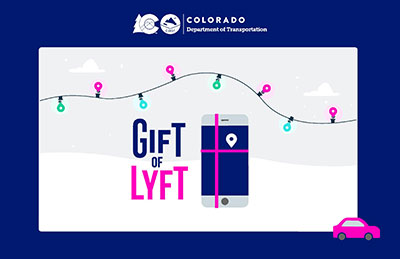 The Colorado Department of Transportation (CDOT) was one of five State Highway Safety Offices to receive a grant from GHSA and ride-hailing company Lyft to prevent impaired driving during the 2020 holiday season. With its grant, CDOT created a ride credit promotion called “Gift of Lyft” that awarded a $10 Lyft ride credit to Coloradans who signed an online pledge to never drive impaired.

Mothers Against Drunk Driving (MADD) Colorado, Thornton and Denver police departments and other local traffic safety partners participated in a campaign to promote the “Gift of Lyft” through social media posts and images. Altogether, the promotion garnered over 153,000 total impressions on social media, generating significant interest in the program. “Gift of Lyft” was also covered by a wide array of online, television and print media, resulting in nearly 300 news articles covering the promotion.

Although ridership was down for ride-hailing services due to COVID-19, the promotion received major media coverage and distributed over 350 ride credits.