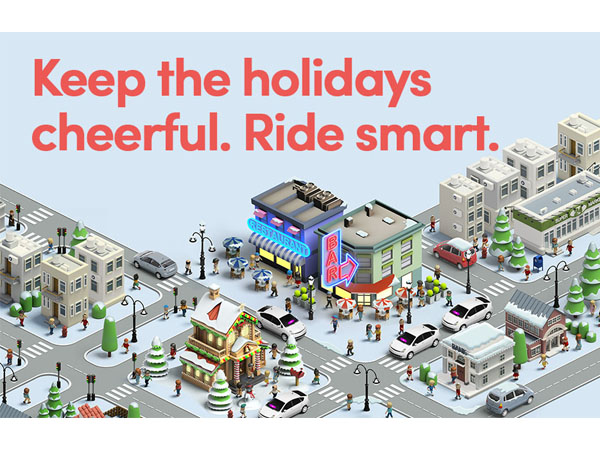 As the recipient of a grant from GHSA and Lyft, the Illinois Department of Transportation (IDOT) teamed up with the Illinois State Police (ISP) for "Ride Smart," a social media campaign encouraging ride-hailing as an alternative to impaired road use.

Recognizing that the holiday season is a particularly dangerous time on the road, the Ride Smart campaign was carried out during the final two weeks of 2018. In mid-December, IDOT and ISP distributed a news release announcing the availability of $10,000 worth of Lyft ride credits in St. Clair and Madison Counties – the two largest counties in the Illinois Metro East region. To encourage those interested in the credits to engage with local law enforcement, the ride codes were announced on regional law enforcement agencies and the Illinois State Police's social media pages. More than 10 state and regional agencies as well as the ISP promoted and shared the codes, which provided up to $20 in Lyft credit, on their respective platforms. This effort proved extremely successful: within the first three days of the campaign, 70 percent of the credits had been redeemed. To extend the length of the campaign and build on its success, Lyft added an additional $5,000 in credits to be used by those celebrating New Year's Eve.

Ultimately, Lyft ridership in December 2018 grew 303 percent in St. Clair County and 755 percent in Madison County compared to the prior year, an indicator of the popularity and positive reception of Ride Smart. Through this campaign, IDOT was able to provide discounted or free Lyft rides to 750 people during the holiday season, offering a safe way home to those too impaired to travel safely on their own.