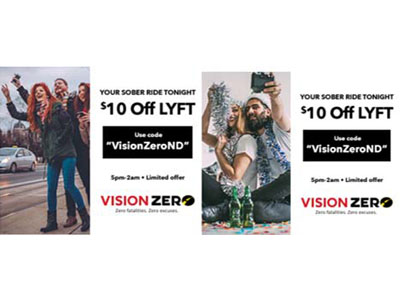 As the recipient of a grant from GHSA and Lyft, the North Dakota Department of Transportation (NDDOT) bolstered its winter anti-impaired driving campaign with additional media efforts and discounted rides for impaired travelers.

NDDOT's initial enforcement and education campaign ran from December 2018 through January 2019, featuring ads across television, radio, and the internet featuring a true, first-hand account of the consequences of driving under the influence. To support this effort, NDDOT ran a concurrent campaign highlighting the dangers of traveling impaired and encouraging drivers to find a sober ride home using Lyft. This campaign included paid social media efforts on Facebook and Instagram, paid digital ads targeting higher-risk users, and the distribution of a press release to media outlets around the state, offering $10 Lyft ride credits to those in need of a safe ride home.

This effort was extremely successful, with social media posts reaching more than 54,000 people and nearly 3,000 people clicking on digital advertisements. Additionally, 23 media outlets reported on the effort, promoting the availability of discounted rides. More than 800 people utilized the discount code over the campaign period, with more than 200 uses by those celebrating New Year's Eve. Through this grant, NDDOT was able to reach many North Dakotans with the anti-impaired driving message and keep potentially impaired drivers off the roads during a dangerous time of the year.