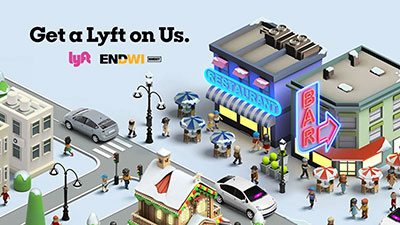 The New Mexico Department of Transportation (NMDOT) was one of five State Highway Safety Offices to receive a grant from GHSA and ride-hailing company Lyft to prevent impaired driving during the 2020 holiday season. With its grant, MNDOT assisted the state in addressing the high numbers of alcohol-involved crashes through their Get a Lyft on Us public awareness campaign.

NMDOT focused on the four 2020-2021 holiday periods for its Get a Lyft on Us campaign. NMDOT press releases, radio ads and social media posts were used to promote the Lyft ride credits during Thanksgiving, Christmas, New Year’s Eve and the 2021 Super Bowl periods.

In November, New Mexico’s Governor issued a public health order that would be in effect until the end of the month that advised the public to shelter-in-place, and food and drink establishments could not provide indoor or outdoor dine-in service. Due to concern about promoting ride-hailing during the public heath order, NMDOT considered options to move more ride credits to holiday event periods later in the year.

With assistance from GHSA and Lyft, NMDOT adjusted its plans for the Super Bowl campaign, creating $20 ride credits and enabling their use anywhere in New Mexico. NMDOT issued a promotional press release on January 21, 2021 and radio promotion continued to be aired in the Las Cruces market for a total of 750 spots and an estimated audience of 480,000.

Given the COVID-related restrictions in New Mexico during the campaign, the expanded public safety messaging via radio, social media and press releases ultimately enabled NMDOT to reach large segments of the population and introduce many of them to an available, affordable, safe option. Although the campaign was initially focused on one area of the state, the expansion to statewide availability garnered more overall usage of the ride credits. As evident by the 319 ride credits used statewide during the Super Bowl, it is clear the messaging was successful, and the state benefitted greatly from this opportunity.