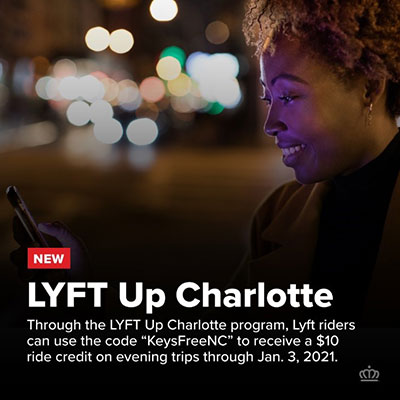 The North Carolina Governor’s Highway Safety Program (NCGHSP) was one of five State Highway Safety Offices to receive a grant from GHSA and ride-hailing company Lyft to prevent impaired driving during the 2020 holiday season. With its grant, NCGHSP created the “Lyft Up Charlotte” campaign to bring public awareness to the consequences of driving while impaired.

Mecklenburg County, the largest county in North Carolina with over 1.1 million people, was chosen as the focus of the campaign. The county had the most alcohol-involved roadway fatalities during the past four years of any county in the state, with 179 alcohol-related deaths from 2015 to 2019. According to statistics from the Charlotte area Department of Transportation/Hospital Consortiums, 51-65% of trauma and fatal road victims, as measured by blood draw, are impaired, not only by alcohol but marijuana and opioids as well.

NCGHSP worked in unison with many partners in the Mecklenburg County area to promote the ride-hailing option as a safe alternative to driving impaired during the 2020 holiday season. Partners included the City of Charlotte Vision Zero Task Force, the City of Charlotte Neighborhood Services and City of Charlotte Department of Transportation, state, county and local law enforcement agencies, local hospitals, injury centers, the Charlotte Center City Partners and University City Partners, the Junior League, the United Way, and the Chamber of Commerce.

These NCGHSP campaigns during the 2020 holiday season reduced impaired driving in North Carolina’s largest city. Integrating the ride-hailing opportunities into the Holiday Booze It & Lose It initiative and the floor sticker campaign provided tangible tools to prevent impaired drivers from getting behind the wheel. Despite the pandemic, the cooperation with bars, restaurants, grocery stores and other merchants resulted in nearly 1,000 people utilizing the Lyft code coupons.