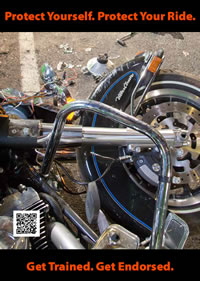 In the Fall of 2012, after analysis of motorcycle rider crash data, the Michigan Office of Highway Safety Planning (OHSP) determined that the “unendorsed” operator was far over-represented in motorcycle crashes. Unendorsed operators made up over half of all crashes and fatalities that involved a motorcycle. Further analysis of all registered motorcycles (nearly 250,000) with the Michigan Department of State (MDOS) revealed that approximately 20 percent (nearly 50,000) were being operated by an unendorsed motorcyclist. The reason for this over-representation may have been a lack of proper motorcycle training by riders, and the motorcycle safety community wondered if proper motorcycle training would reduce crashes.

The OHSP, with the support of several state motorcyclist safety partners, coordinated an initiative to contact every known unendorsed operator of a registered motorcycle in Michigan with a strategically planned message. In early spring of 2013, nearly 50,000 individuals were mailed a postcard informing them of the benefits of becoming a properly trained and endorsed motorcyclist and encouraging them to “Come out of the Shadows.”

The motorcycle crash data and MDOS records were analyzed in the fall of 2013, nearing the end of the riding season to determine if the spring mailing had a positive effect. Although the unendorsed population was minimally improved, OHSP found that the first mailing missed a large population of unendorsed operators (nearly an additional 10,000) because the annual seasonal peak in motorcycle registrations was not captured at the most optimal time of the Michigan riding season.This meant that there was still about 20 percent of the motorcycling population who continued to ride unendorsed, representing nearly 55 percent of all motorcycle crashes in Michigan. A second analysis of the 2013 motorcyclist fatalities revealed that nearly 85 percent of those riders killed had not taken a certified motorcycle training course anytime in the last ten years, supporting the initial theory that the unendorsed motorcyclist fatalities also lacked proper motorcycle operation training.

OHSP continued the effort to contact the unendorsed population by mail again in the spring of 2014. This time a stronger message was used, informing those motorcyclists of the consequences of riding untrained and unendorsed. Analysis of all the registered motorcycles in Michigan in the fall of 2014 revealed that the unendorsed riding population had potentially received the message. Unendorsed riders were estimated to represent about 16 percent of the registered Michigan motorcycling population, a 4 percent decrease from the previous year and a 13 percent decrease in the total number of unendorsed operators. OHSP determined that of those that were mailed a postcard in the spring, over 5,400 (13 percent) had obtained their endorsements during the season. Preliminary 2014 crash data has not been analyzed yet to determine the number of unendorsed operators involved in a motorcycle crash, injury or fatality, but overall motorcycle crashes in Michigan are predicted to be less than the previous riding season.

OHSP is planning a third mailing this spring to the remaining nearly 41,000 unendorsed operators of a registered motorcycle with the State of Michigan and a fourth mailing in mid to late summer of 2015 to remind those who continue to operate a motorcycle in Michigan unendorsed of the consequences. It is our firm belief that this effort is having a positive effect on reducing the number of unendorsed motorcyclists involved in a crash or fatality in Michigan.