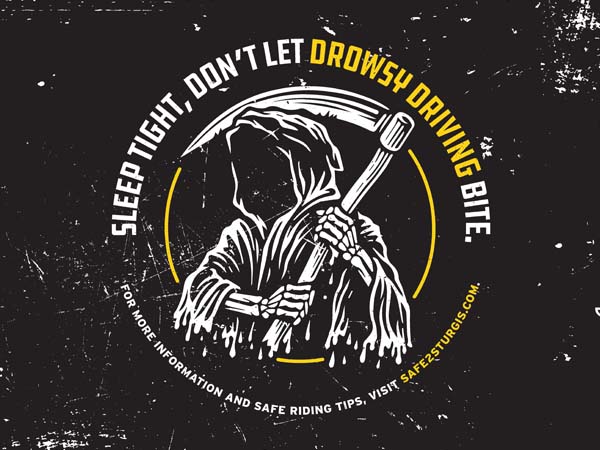 Choosing to tailor outreach to motorcyclists, the South Dakota Office of Highway Safety took an innovative approach to the use of its drowsy driving grant from The National Road Safety Foundation, Inc. and GHSA. The state is home to the annual Sturgis Motorcycle Rally, which occurred in August of 2018 and drew more than 500,000 vehicles to the state. With 25% of South Dakota’s drowsy driving crashes happening in July and August, the time was ripe for a campaign discouraging motorcyclists from riding drowsy.

The campaign, "Safe2Sturgis," reached rally attendees through both onsite efforts and social media. Onsite tactics focused on “in-room” care packages in attendees’ hotel rooms: the Office of Highway Safety produced 1,500 pillowcases, 17,000 hotel key cards, and 1,000 handouts to give to riders as they checked in at hotels near the rally. Featuring the message “Sleep tight, don’t let drowsy driving bite,” the care packages included information about the dangers and warning signs of drowsy driving, as well as links to receive further resources. The Office of Highway Safety also used its own networks as well as mobile geofencing to reach more than 150,000 rally-goers and followers with social media messaging warning against drowsy driving. Finally, the campaign used online display banners with the message “Drowsy riding is deadly. Ride awake. Ride alive,” which linked users to facts about fatigued riding and tips to avoid it.

The Safe2Sturgis campaign had a significant presence at the rally, where crash fatalities reduced by 50 percent from the year prior. Perhaps even more encouragingly, as of October, the state had seen zero drowsy driving fatalities in 2018.