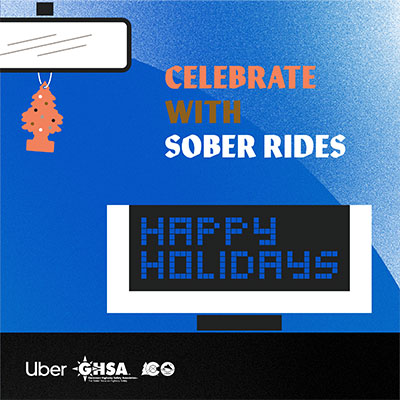 The Colorado Department of Transportation (CDOT) was one of five State Highway Safety Offices to receive a grant from GHSA and ride-hailing company Uber to prevent impaired driving during the 2021 holiday season. With its grant, CDOT offered $15 Uber ride credits across Colorado through the “Ultimate Party Host” campaign.

CDOT focused its campaign on Coloradans hosting holiday parties to inspire hosts to urge their guests not to drive impaired, creating a personal and relatable impact. CDOT promoted the campaign through social and traditional media to inform its statewide audience about the ride credits. To reach party hosts directly, CDOT hosted a pop-up event at Denver’s Argonaut Wine & Liquor, during which store patrons received the $15 ride credits to distribute to their holiday party guests.

With strong interest from the public, the initial batch of ride credits were all claimed within their first week of availability, before the pop-up event. Working with GHSA and Uber, CDOT quickly altered its campaign strategy to make an additional 200 ride credits available for the event, where CDOT staff interacted with over 100 people.

At the conclusion of the grant period, CDOT garnered in excess of 3 million impressions through earned media, with more than 2.5 million of those impressions coming from online and print media stories. Overall, 803 people redeemed a ride credit, with 663 redemptions out of the 666 available in the first batch and 140 redemptions out of the 200 available in the second. When combining both batches, roughly 92% of all credits were redeemed, demonstrating the strong demand in Colorado for safe alternatives to impaired driving. Although the full $15 was not used for each separate redemption, the widespread awareness of the promotion and the quick pace that the credits were claimed were considered huge successes.