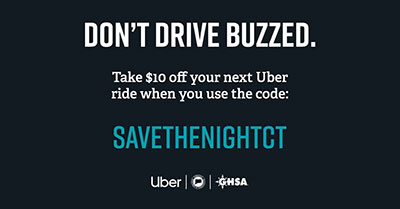 The Connecticut Department of Transportation Highway Safety Office (CTDOT HSO) was one of five State Highway Safety Offices to receive a grant from GHSA and ride-hailing company Uber to prevent impaired driving during the 2021 holiday season. With their grant, the CTDOT HSO offered $10 Uber ride credits throughout the state from 5 p.m. to 4 a.m. ET and promoted them widely through press releases, partner networks and social media.

The program in Connecticut was incredibly popular with residents, evidence of the demand for convenient alternatives to driving impaired. There was significant media interest in the program, with TV, radio and online news outlets covering the ride credits and sharing the code with residents. The ride campaign gained 29,838 impressions and reached 18,975 people on social media. Due to this extensive outreach, the allotted ride credits were used up within one day of launching on November 23, 2021.

The program re-launched with additional funding provided by the Foundation for Advancing Alcohol Responsibility. This second round had an even stronger impact on social media, with 66,748 impressions and 42,617 reached. This batch of ride credits were for weekends between December 17, 2021, and January 1, 2022, when holiday travel and parties provide additional opportunities for impaired driving.

In total, more than 6,500 ride credits were redeemed by state residents. That’s 6,500 fewer potential drunk drivers on the road at a time when traffic fatalities in the state have been increasing at an unprecedented rate.

In addition, the CTDOT HSO reported that the ride credit promotion led to more information-sharing among many of the state’s law enforcement agencies and lots of discussions on social media with state residents.