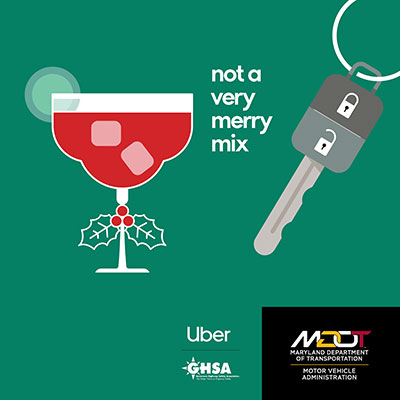 The Maryland Department of Transportation Motor Vehicle Administration’s Highway Safety Office (MHSO) was one of five State Highway Safety Offices to receive a grant from GHSA and ride-hailing company Uber to prevent impaired driving during the 2021 holiday season. With their grant, MHSO promoted the use of Uber ride credits through their “Be the Make a Plan Driver” campaign and materials.

The initial time period set for the promo codes was November 24, 2021 through January 1, 2022 for the entire state. To kick off the campaign, Governor Larry Hogan teased the news at the annual Maryland Remembers event that honors victims of impaired driving. This initial announcement at the event, followed by a post-event media release from Governor Hogan, created a lot of buzz about the program. The MHSO seized on this popularity by issuing a news release two days later, leading to significant media coverage over the course of several weeks.

MHSO and Governor Hogan’s promotion of the Uber ride credits proved to be extremely popular with residents throughout Maryland. The ride credits were in such high demand that every credit was redeemed in the first 72 hours of the campaign. Wanting to keep the campaign going, MHSO regrouped with GHSA, Uber and Responsibility.org to relaunch another batch of ride credits for New Year’s Eve. At the conclusion of the grant period, Marylanders redeemed 4,160 Uber ride credits worth over $41,000. Each of those 4,160 rides offered a potential impaired driver an alternative to getting behind the wheel, helping reduce drunk- and drug-impaired driving during a time when such crashes and fatalities typically rise. Overall, this grant program was a great success for Maryland. MHSO was able to leverage the support of Governor Hogan, which led to additional news coverage and increased reach throughout the state. The utilization of the existing “Be the Make a Plan Driver” campaign allowed for grant funding to be spent completely on Uber ride credits and paid advertisements rather than creating new materials.

The number of impaired driving citations issued are affected by several variables, including but not limited to, weather, funding, and staffing by law enforcement, making it difficult to provide direct comparisons from year to year showing the effectiveness of program activities. However, an analysis from Washington College showed that there was an overall decrease in impaired driving stops during the November 24 through January 1 timeframe from 2019 to 2021, dropping from 2,109 stops in 2019 to 1,666 stops in 2021. Preliminary data also shows that Maryland experienced a decrease in overall fatalities due to motor vehicle crashes in 2021.