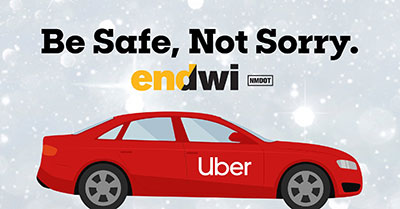 The New Mexico Department of Transportation (NMDOT) was one of five State Highway Safety Offices to receive a grant from GHSA and ride-hailing company Uber to prevent impaired driving during the 2021 holiday season. With its grant, NMDOT used Uber ride credits to complement its “ENDWI” campaign against impaired driving.

NMDOT conducts the “ENDWI” campaign to address the high number of alcohol-involved crashes and fatalities in high-risk areas of the state. From November 19, 2021, through January 1, 2022, NMDOT initiated a “Winter Superblitz” that included high-visibility impaired driving enforcement, paid and earned statewide radio and television ads, and social media posts and outdoor messaging in both English and Spanish, reaching a large audience throughout the state. NMDOT promoted the Uber ride credits through social media, and media coverage of the grant further increased this reach.

After consulting with GHSA, NMDOT made the decision not to limit the number of rides or locations that credits could be used based on experience with a similar grant the previous year. Due to high demand for the discounted rides, on November 26, 2021, Uber limited the ride credits to two uses per person to prevent them from being used prematurely. All 2,000 ride credits had been applied as of December 21, 2021. By the end of the campaign, 364 ride credits were redeemed. A shortage of Uber drivers in New Mexico at this time likely contributed to the lower number of redeemed rides, but the fact that all ride credits were applied demonstrated the overwhelming demand for a safe alternative to driving impaired.