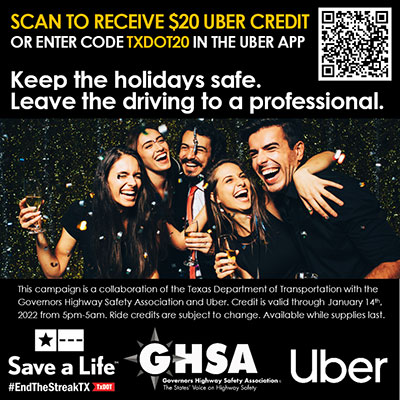 The Texas Department of Transportation (TxDOT) was one of five State Highway Safety Offices to receive a grant from GHSA and ride-hailing company Uber to prevent impaired driving during the 2021 holiday season. With their grant, TxDOT created a program to specifically focus Uber ride credits in the Houston region, which has the most DUIs in the state.

TxDOT’s goal was to promote 1,000 ride credits in $20 units between Thanksgiving and Christmas, with an additional campaign for New Year’s Eve if needed. The promotion was done through social media with the goal of reducing DUIs and impaired driving fatalities for the period of the campaign.

This campaign was heavily shared on social media, with Facebook being the most popular platform, garnering 484 shares. The campaign was also covered by 11 different news websites, including FOX 26 Houston and the Houston Chronicle, increasing awareness of the program for residents in the Houston area.

TxDOT experienced exceptional success in the marketing and promotion of the campaign. They explored new social media sites as well as partnered with local influencers to spread the campaign information. This approach clearly worked, with all ride credits being redeemed in only a week which Uber donated additional funding to help with the campaign. Data shows that DUI alcohol crashes in the Houston area decreased during the campaign, a positive sign considering that far more drivers were on the road during the 2021 holiday season compared to the year before. Overall, Texas converted over 1,718 citizens to take a sober ride as opposed to drinking and driving during the campaign period.