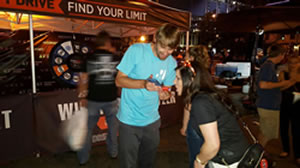 Technology allows us to make smarter decisions about our health and lifestyle, and the same can be said for responsible alcohol consumption. With the introduction of personal breathalyzers, you don’t have to guess and hope you’re OK to drive — now you can get an estimate of your impairment.

Over the 2015 Labor Day weekend in Denver, the Colorado Department of Transportation offered bar hoppers an opportunity to know their blood-alcohol level by using a breathalyzer linked to a smartphone. People were also given the chance to win Alcohoot smartphone breathalyzers and ride credit with Uber. The late night events aimed to educate the public about safe alcohol consumption and to curb Labor Day DUIs.

The events featured eye-catching visuals to attract downtown bar patrons where they could find out “how drunk am I?” Media had the opportunity to test the personal breathalyzers and interview participants. The events were held in tents set up in parking lots near popular bars and included a fun, light-hearted theme with balloons, music, food and games. A young, hip street team engaged people as they walked by the tent. Another event was held inside the baseball stadium during a Colorado Rockies game so baseball fans could test their BAC limit. All events coincided with the Labor Day DUI enforcement period.

These events received significant attention by the public and the media. Over 3,500 people stopped by and 750 people tested out an Alcohoot breathalyzer, of which 140 were given away as prizes. In addition, $1,000 in Uber ride credits were given away. The campaign received 13 on-air TV stories with an estimated 369,252 impressions and $105,545.03 publicity value. Five online stories also generated an estimated 2,234,903 impressions.