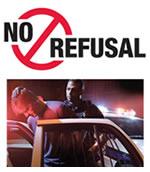 The No Refusal program uses police, prosecutors, judges, and medical professionals to obtain search warrants for blood samples from suspected impaired drivers who refuse breath tests. During specified periods, prosecutors and judges are on call to issue search warrants that enable law enforcement to legally acquire blood samples to present solid, scientific evidence in court. With this evidence, judges are less likely to dismiss cases and juries are less likely to find a DWI suspect not guilty.

The No Refusal strategy was launched by Montgomery County, Texas prosecutor Warren Diepraam, who wanted to combat the high rate of breath test refusal in Texas and help build strong cases to convict drunk drivers. Texas leads the nation in DWI fatalities, and the No Refusal program attacks this problem head on.

After implementing No Refusal weekends in Diepraam’s jurisdiction, DWI fatality charges dropped 70 percent and DWI cases went down 30 percent. The test refusal rate fell to 25 percent from the state average of 45 percent. Other jurisdictions have had similar results.

In 2010, as a NHTSA prosecutor fellow, Diepraam ushered the No Refusal strategy into other states, including Louisiana, Missouri, Illinois and Kansas, and he continues to push to expand the strategy to as many states as possible.

During his time as a NHTSA prosecutor fellow, Diepraam trained thousands of prosecutors, judges, and police. He traveled across the nation teaching people about No Refusal and other DWI issues. Diepraam was also the first prosecutor in Texas to convict a drunk driver for felony murder rather than the traditional charge.

The U.S. Department of Transportation has recognized the No Refusal program’s success. In December of last year, DOT Secretary Ray LaHood highlighted the program during the holiday drunk driving crackdown kickoff. Diepraam assisted NHTSA in developing a No Refusal weekend toolkit web page.

Funding provided through the Texas DOT (TxDOT) has allowed the number of Montgomery County DWI No Refusal nights to increase from 16 to 56 per year. Other counties have also received funding for this purpose. TxDOT funding is used to pay prosecutors overtime and for nurses to be available to draw blood.

The program has been challenged by defense lawyers, but it has repeatedly been upheld by the courts. These cases have generated a lot of media attention, which in turn helps to publicize DWI enforcement.

The No Refusal program has brought police, prosecutors, nurses and judges together toward a common cause. It has clearly been successful in preventing death and tragedy on Texas roadways, and it continues expand across the nation.